In 2018, on the 100th anniversary of the birth of The Brand’s founder, Mr. KIHACHIRO ONITSUKA, onitsuka tiger traces back to the classic, resharpe to newborn, launches the upgraded mexico 66 SD series, and pays sincere tribute to the classic “red, white and blue”. 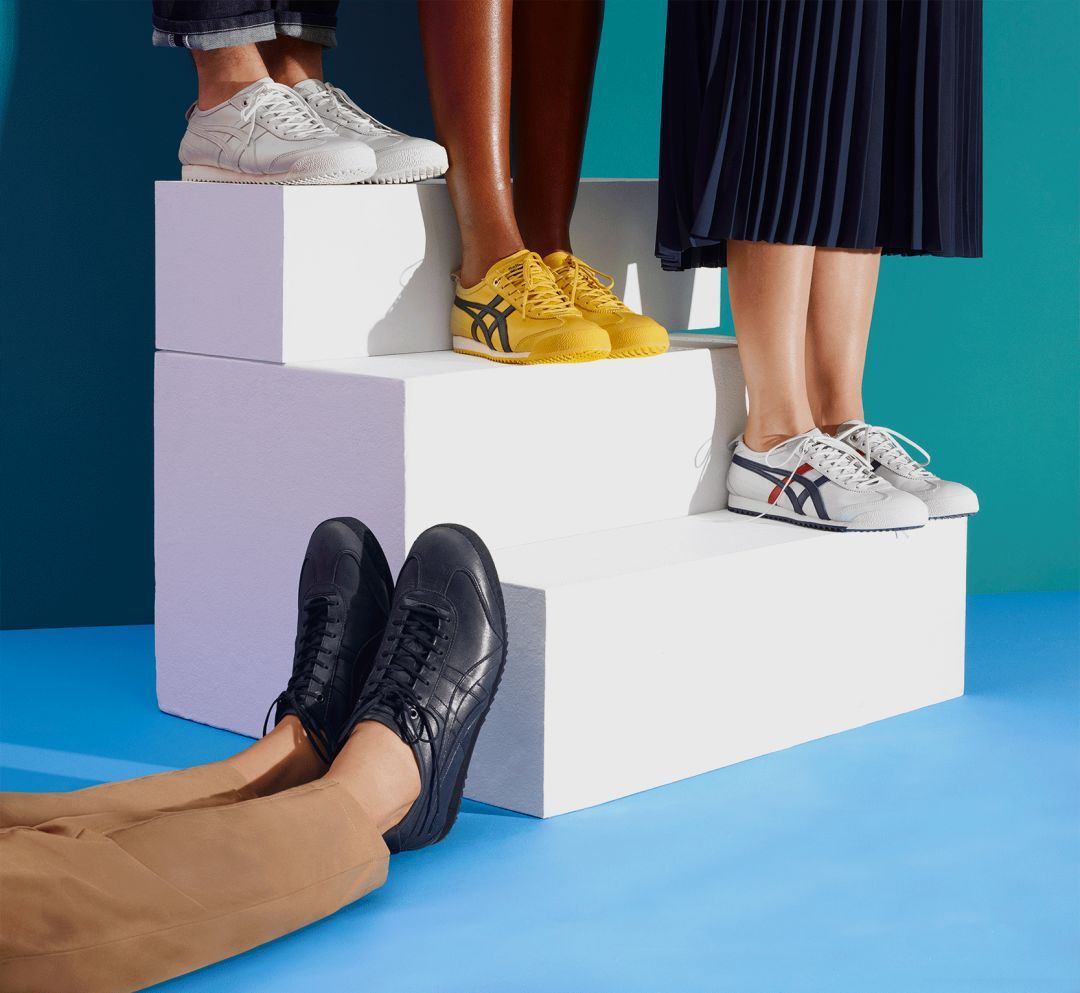 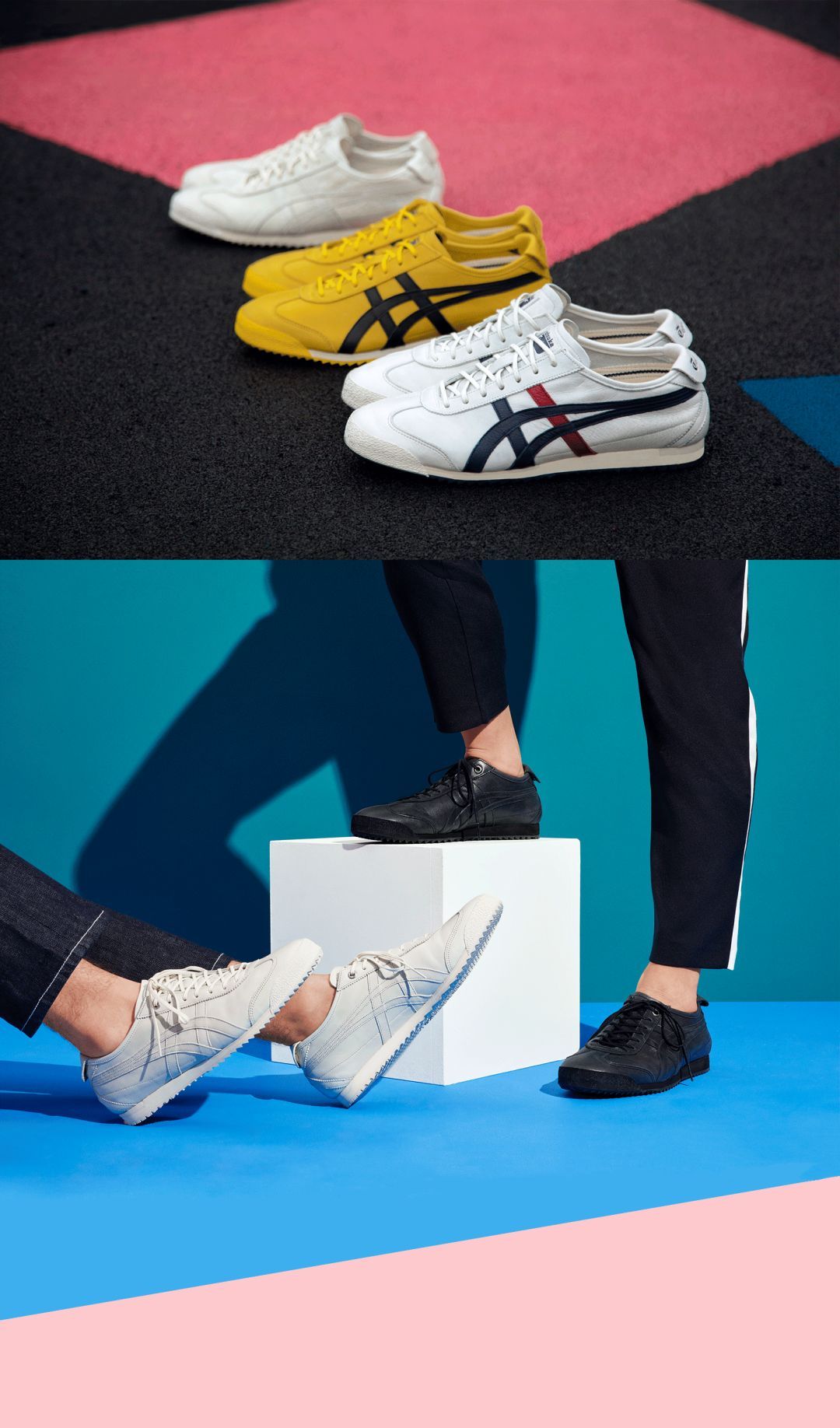 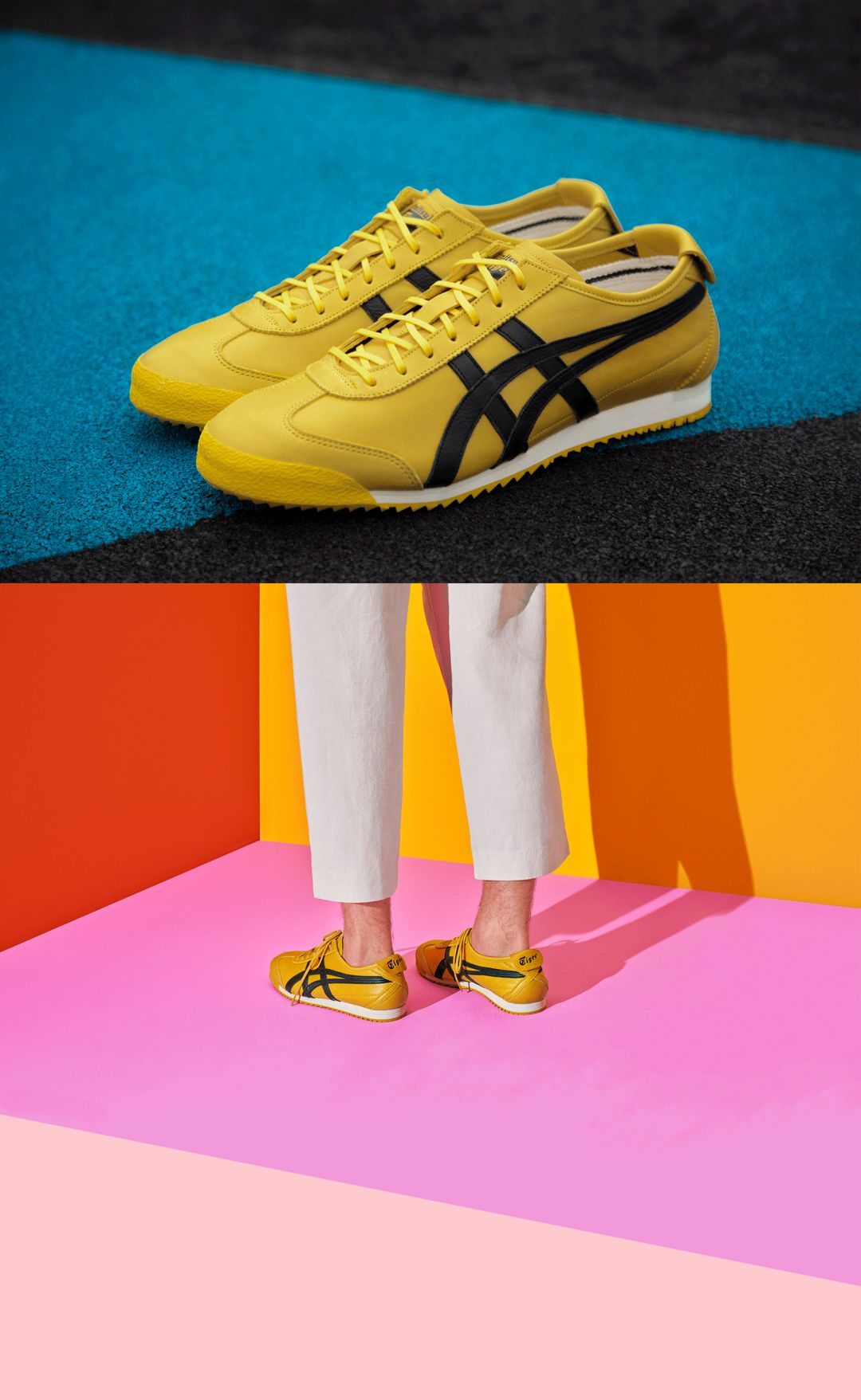 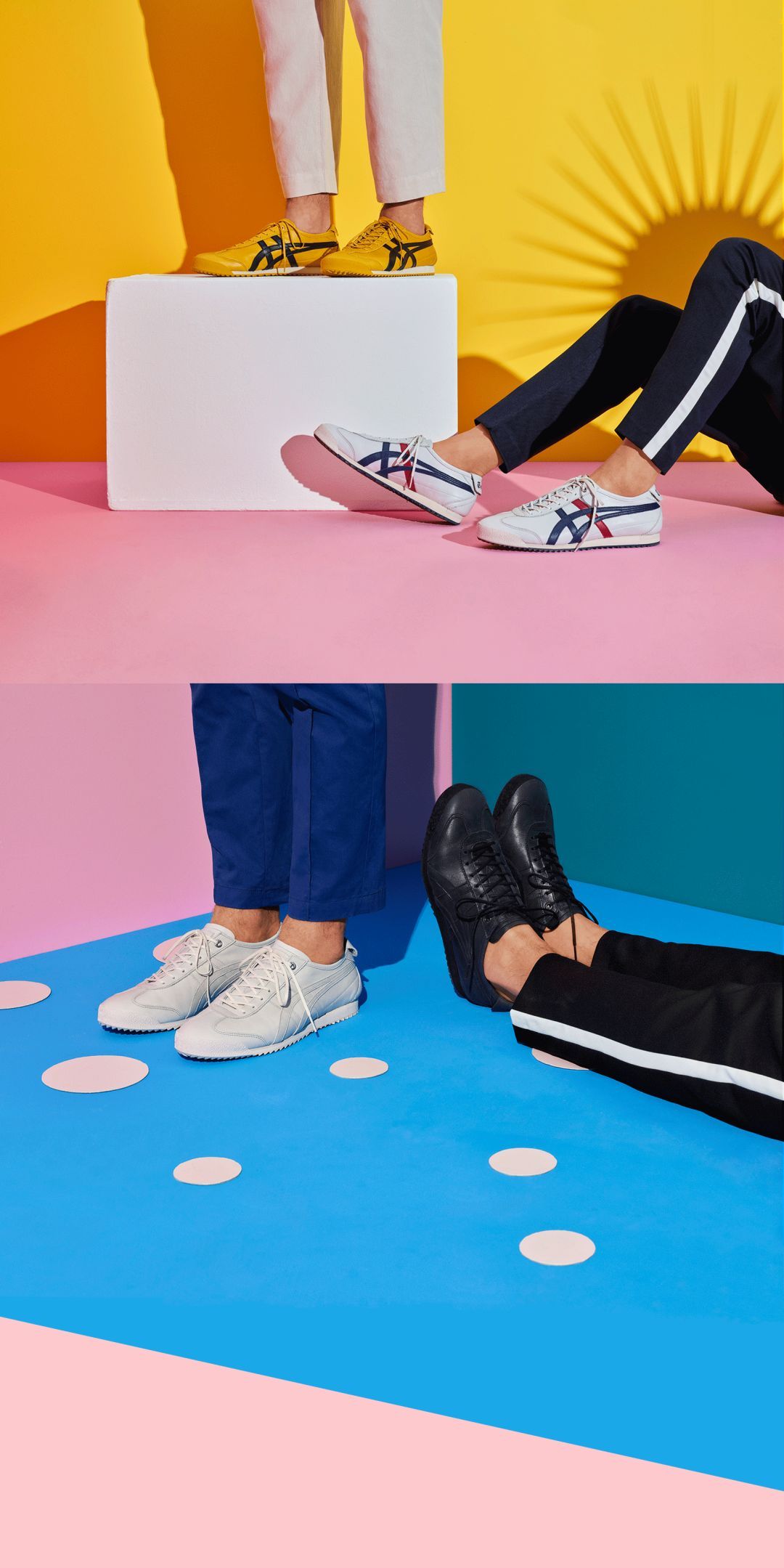 onitsuka tiger traces back to the classic, resharpe to newborn

Only by constantly refining from classics, we are able to promote in the future 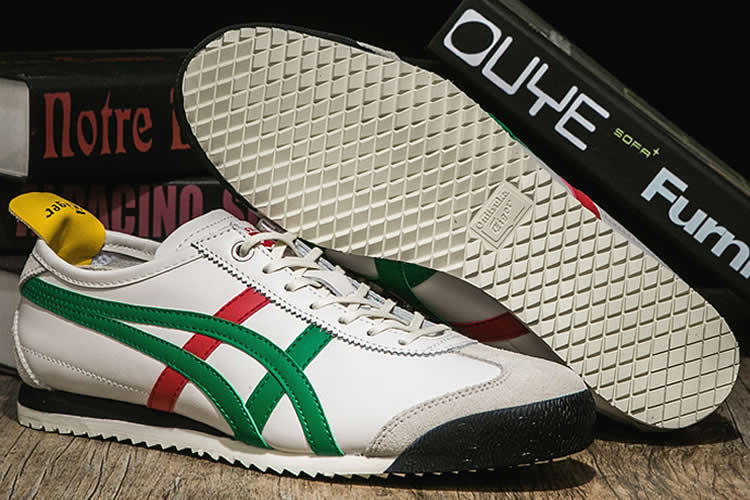 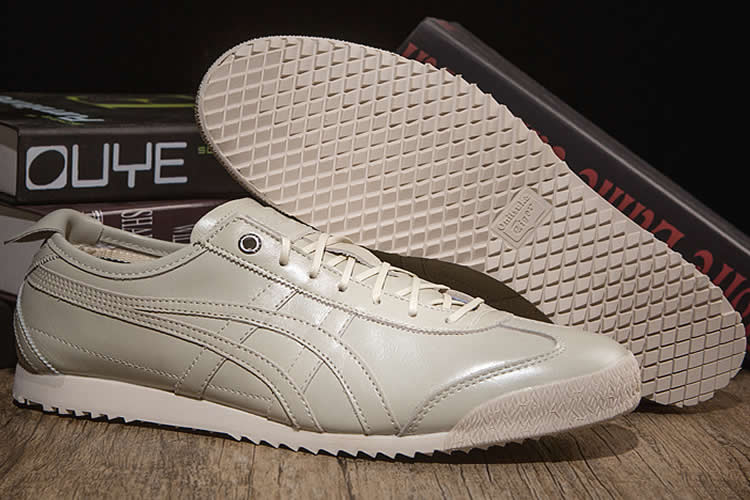 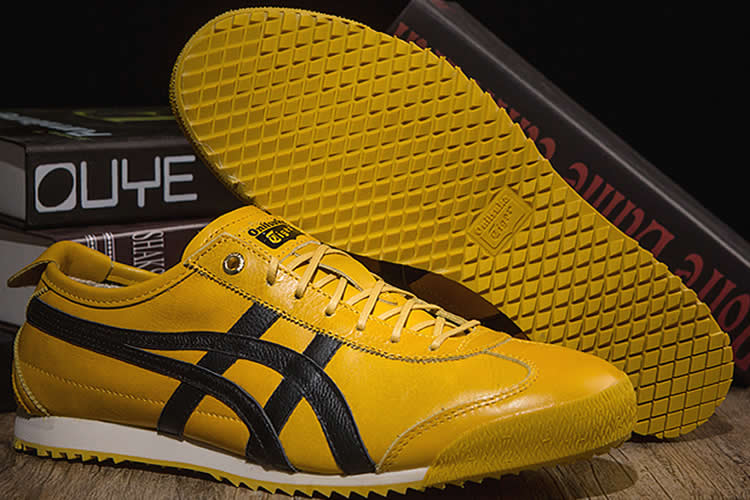 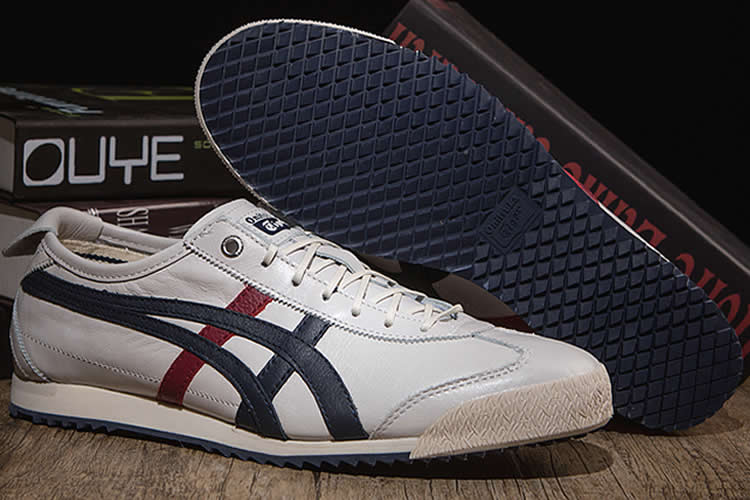 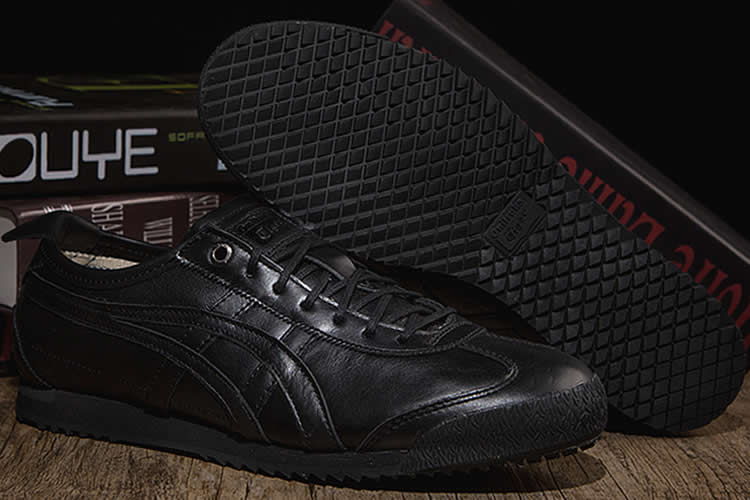 What’s the difference between ASICS and Onitsuka Tiger? It’s not as simple as having different names. 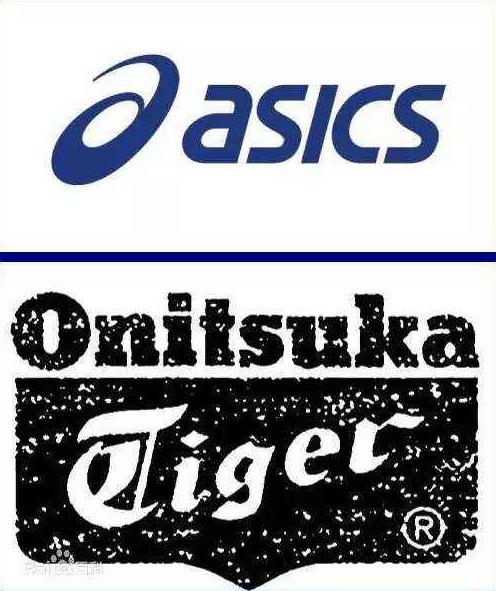 The shoes of these two brands look very similar, even the logo is almost the same.  Not only it is difficult to find out the differences, but also hard to distinguish each other. Are the twins carved out of the same grinding tool except for their names?

Certainly it is not so simple. There are some specific factors to separate them. Speaking of this, I will lead you to distinguish their differences carefully.

Firstly. Difference in practical use.

Strictly speaking, the Onitsuka Tiger is the “father” of ASICS. In the 1940s, ASICS has not appeared, but the “tiger” sneakers from Japan swept the world, and even the Americans specifically opened a “Blue Ribbon Sports” company (the predecessor of Nike), which is responsible for the sales of tiger sneakers in the Americas.

At that time, the athletic and running shoes were basically from the tiger brand, which is now called Onitsuka Tiger. Later, in the 1970s, the company was reorganized, sports technology and designers were moved to another part, and a new professional sports brand, ASICS, was established in this part; but the original tiger brand began to transform, and went to the route of retro, leisure and fashion.

Since the actual use is different, the design style of shoes must be different. Although it looks similar in appearance, but observe carefully, you will find that a new trend attribute of transformed onitsuka tiger.

This trend attribute is combined by many popular elements, such as vamp color, line design, detail control, etc., plus its own retro style, gradually the Onitsuka Tiger has become a trend indicator. On the other hand, ASICS, driven by the professionalism, his shoes are all professional as the core idea, all for sports and services. Whether it’s on air cushion cushioning or anti-skid outsole, ASICS can make you see that it’s an athletic sneaker, not a tide shoe.

Although the sales plans of the two brands are all facing the market, their respective market consumer groups are quite different. Let’s first talk about the Onitsuka Tiger. As a leisure sports brand, it has actually stepped into fashion brand.

Therefore, it has all the characteristics of fashion brand, such as joint name, premium, reproduction, customization, etc., mainly for fashionable, young and fashionable group. But for ASICS, it didn’t have any of these ethereal things. What it has is professional, technological and comfortable, so people who buy ASICS shoes need a pair of “tool shoes”.

The Onitsuka Tiger and ASICS are both from the same company, but they have different styles. If you still can’t tell the difference only from the appearance, I will point out one place, the logo on the shoes tongue, one is thin retro and the other is thick modern.

About onitsuka tiger, Some importance you may not know.

Begin talking about Onitsuka Tiger, in addition to its hard to pronounce, the first impression for many people is that it is a pair of classic sports shoes – matching with red, white and classic blue color, thin and narrow shoes with thin soles, eh, seems familiar?

In fact, those Cortez sneakers, which were labeled legendary in have to call “Onitsuka Tiger” a predecessor. Maybe you don’t know Onitsuka Tiger a lot: the “living fossil” of Japan’s sports shoes, the “champion equipment” of last century’s Marathon race, and the “exclusive shoes” for Kung Fu superstar Bruce Lee. And so on.

It once shouldered the heavy national mission, adhered to the rigorous and meticulous craftsman spirit, and led the industry in technological innovation. Today, we’re going to talk about this great “Onitsuka Tiger”, how it is still young and energetic after Nearly 70 years.

How was the “Tiger” Born?

In 1949, 31 year old, KIHACHIRO ONITSUKA, decided to revive national morale through sports, so he set up onitsuka tiger in his hometown Kobe with 300,000 yen. 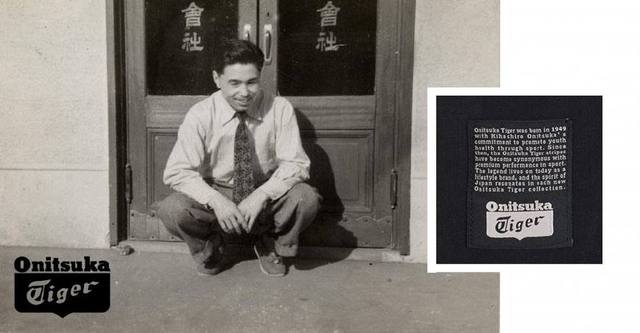 The “Tiger” is the preyer, which can traveling thousands of miles every day. It is a symbol of victory in the Japa and represents the indomitable attitude. In the process of shoemaking, Mr. ONITSUKA highly praised the concept of material and technology excellence, which shows Japanese craftsman’s rigorous, introverted and inherited spirit in Onitsuka Tiger brands after more than half a century.

In Japan, owning a pair of “tiger” shoes is the dream of many young people. The shoes shows Self-esteem and hope.

Shortly after the establishment of the brand, Mr. Onitsuka, the founder, took the octopus suction cup as the inspiration to revise his first pair of basketball shoes and became the leader of shoe making technology.

This is the first improved basketball shoe released by Onitsuka Tiger 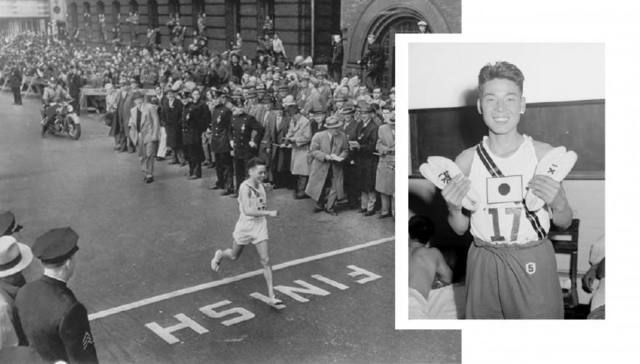 In 1961, Abebe Bikila, a legendary athlete known as the “barefoot Oddballs “, won the Japanese International Marathon Championship. This is the first time he wear onitsuka tiger running shoes in sport game and then he wears shoes all the time on runner games since then. In 1966, more than 90% athletes wore onitsuka tiger’s marathon shoes to participate in major international competitions 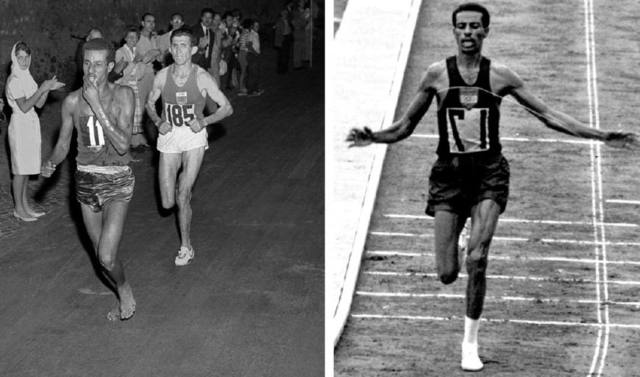 Abebe Bikila, the legendary athlete known as the “barefoot Oddballs ”

Under the continuous innovation of shoemaking technology, Onitsuka Tiger also attracted many foreigners to come to Japan for learning, the most famous man was Phil Knight, who later founded “Blue Ribbon Sports” company with Coach Bill Bowerman, which is a company only for sale of Onitsuka Tiger shoes in America, the predecessor of Nike. 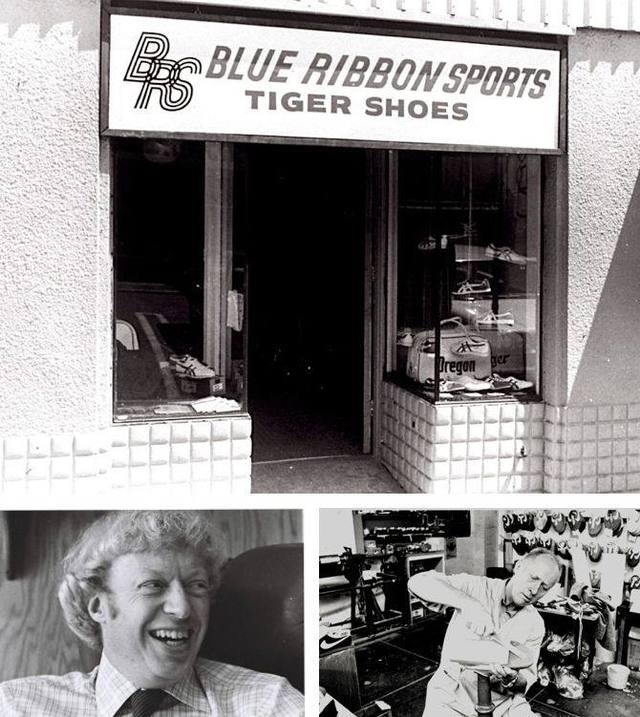 At the beginning, it is an agents only for sale of onitsuka tiger shoes in America, but after a long time, they thought of producing shoes by themselves, so they made a pair of very similar shoes – Cortez, which is called “Forrest Gump shoes” and popular around the world. This matter probably be a Obstacle which Onitsuka Tiger will never get around. 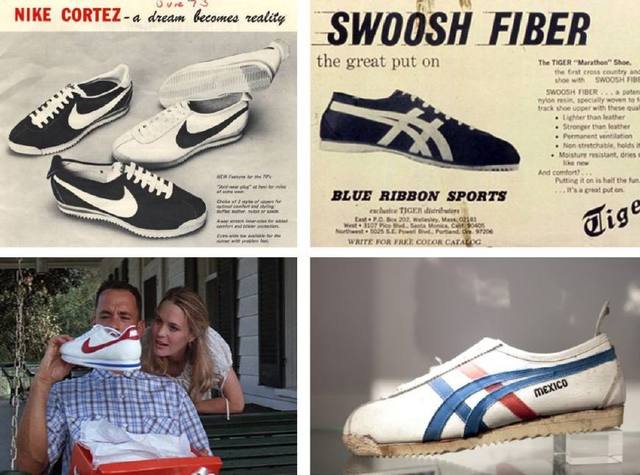 In the story of onitsuka tiger, there is an indispensable protagonist, that is, its most representative visual element, tiger stripes. 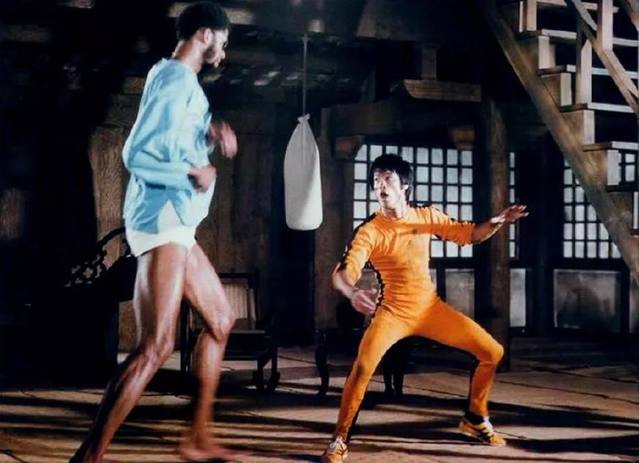 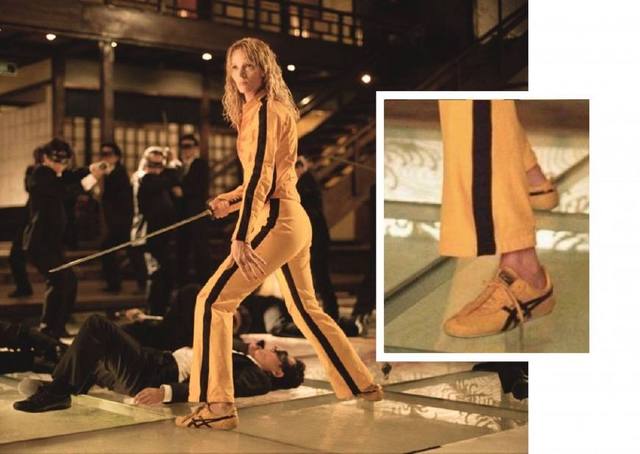 Not only the classic screen of Bruce Lee in his last work “game of death” dressed in a yellow one-piece suit and stepping on a Onitsuka Tiger shoes, but also the movie “Kill Bill” directed by later Movie Wizard Quentin Tarantino, UMA Thurman, in order to tribute the Kung Fu superstar with a Yellow sportswear shape, both are no exception to the national blood contained in tiger stripes is the same with the indomitable spirit.

Interestingly, tiger stripes was not born with the birth of onitsuka tiger brand. There is a special story for it. At that time, the Japanese national team was actively preparing for the worldwide sports event, which will be held in Mexico two years later. As a official supplier for the national team, onitsuka tiger hoped that the brand could showed a unified visualize and design style in various worldwide sports events, so the tiger stripes was first applied to the limber shoe which launched in 1961. 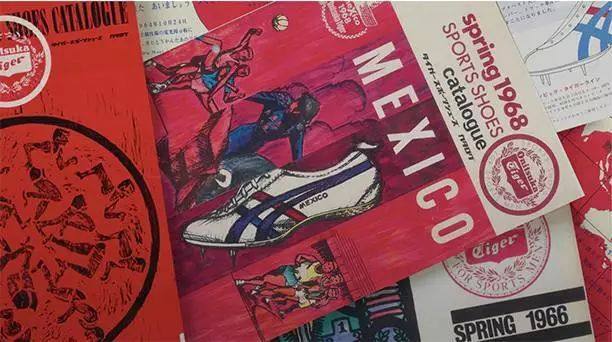 Two years later, the Japanese national team, wearing the shoes with tiger stripes, dominate on the run track in Mexico. That made Japan to win third most gold medals.

And the sneakers that witnessed the historic moment are also evolving. In 2001, it was officially named “MEXICO 66” after being revised and remade, in order to commemorate the glorious time that made Japanese players famous, and tiger stripes has also become the most representative pattern of the brand, which is still used up to now.

For Onitsuka Tiger, the MEXICO 66 has already surpassed the name of a kind of ordinary sports shoes. It is an irreplaceable brand label, a heritage of classics and an important step towards the world.

The upgrade of MEXICO 66 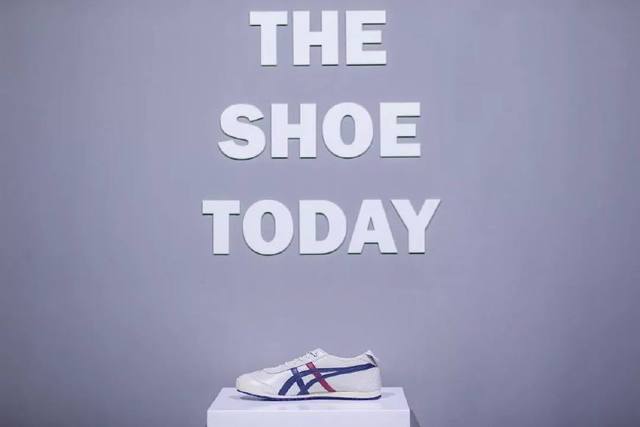 The new arrivals, MEXICO 66 SD continues the iconic details of the original MEXICO 66 shoes – Tiger stripes, narrow body, thin silhouette, back heel cross reinforcement and heel lifting side. For half a century, it has become a symbol of the heritage of onitsuka tiger culture. 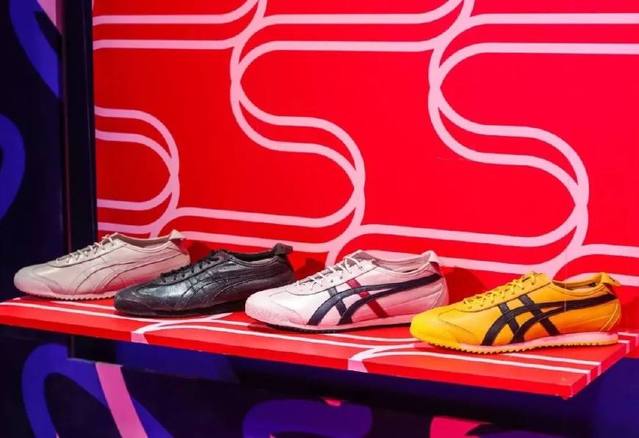 The scene shows the changes of MEXICO 66 over the past half century. From OG to this new MEXICO 66 SD, it expresses the attitude of tracing the origin and continuous innovation

Of course, the MEXICO 66 SD is not only limited to the reproduction of classics, but aso it has a comprehensive improvement both inside and outside. First of all, for appearance, the new series adds more colors on the basis of red, white and blue to broaden the possibility of daily matching. 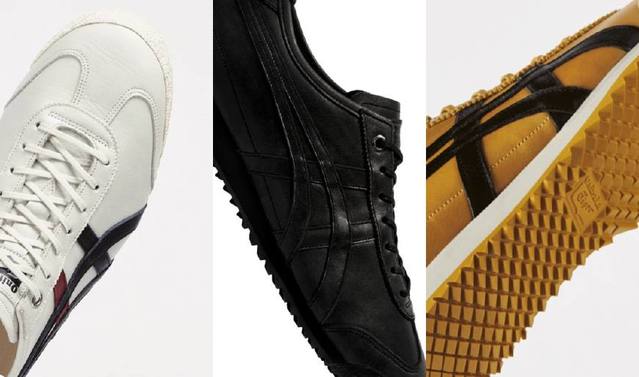 The material is endowed with more excellent texture. The leather is softer in order for more comfortable wear. The upper is made of retro light gray, with a sense of retro era, and presents a fashionable and classic effect. And the design of the shoes body is more slender and concise than MEXICO 66. 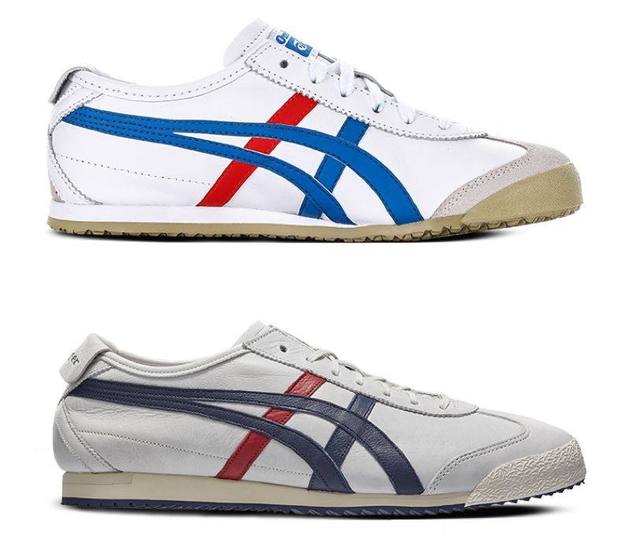 For the function, The front and heel of MEXICO 66 SD are made of fuzeGEL, which is used on professional running shoes. So the cushioning performance is better than that of the previous generation, MEXICO 66. The rubber outsole is also optimized and upgraded to be more antiskid and wear-resistant.

Also, the “breathing” ORTHOLITE insole is used inside the shoes, which not only for more comfortable feel than ordinary insoles, but also breathable, light and wear-resistant. The classical MEXICO 66 is upgraded Along With Time Change, but not forget the original “born for professional athletes” mission. 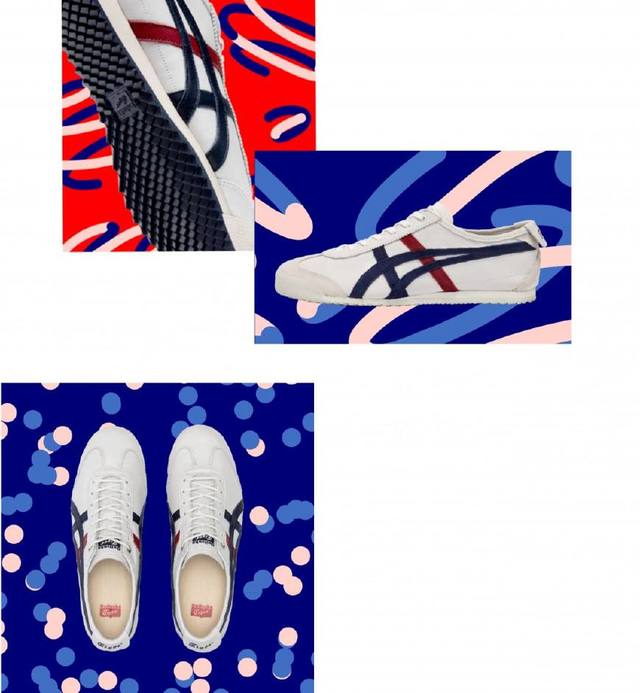 It’s better to say that MEXICO 66 SD is  one more sincere tribute to the founder, than to be a classical copy of MEXICO 66. Till Today, MEXICO 66 is regarded as one of the cultural symbols of Onitsuka Tiger. After more than half a century, it is still on the road of retro innovation and has become a classic beyond the shackles of time.